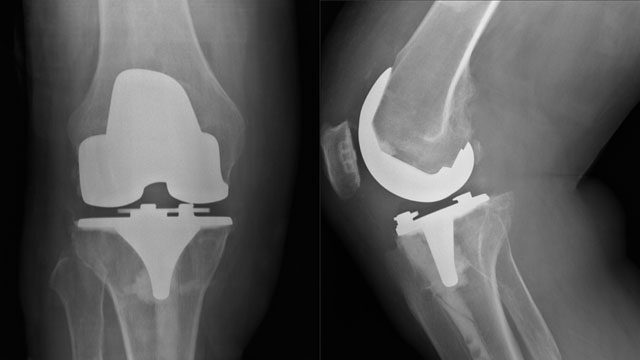 Reason for Recall: According to Zimmer, the Persona Trabecular Metal Tibial Plate has higher than expected rates of complaints of radiolucent lines and loosening. Loosening of the tibial plate can result in severe pain and the need for revision surgery.

Patient Complaints: There have been 40 complaints worldwide of the device loosening, as of March 16, 2015. At least 16 of these complaints have required revision surgeries.

Device Locations: According to Zimmer, the recall affects 11,658 of these knee components worldwide. Zimmer distributed the recalled Persona Trabecular Metal Tibial plates in at least 25 states and at 13 major Veterans’ Administration centers.

March 27, 2012 – FDA approved the Zimmer Persona Personalized Knee System (for cemented use only). Zimmer marketed the Persona Knee as the “most clinically successful knee replacement more personalized than ever.”
November 7, 2012-  FDA approved the Zimmer Persona Trabecular Metal Tibial Baseplate for cemented OR uncemented use.
February 16, 2015-  Zimmer issued an “Urgent Medical Device Recall Notice” to distributors,
hospitals and surgeons regarding the uncemented Zimmer Persona Trabecular Metal Tibial Baseplates. Zimmer asked customers to review the notification and ensure personnel are aware of the contents. Zimmer additionally requested that all affected products be located and quarantined immediately.
March 3, 2015-  Zimmer issued an “Urgent Medical Device Recall Notice” to hospital risk managers and surgeons. Zimmer said that the current complaint rate for radiolucent lines and loosening is higher than Zimmer’s expectations and experience based on Zimmer’s similar devices. At this time, the complaint rate was 0.61% or 6 complaints per 1,000 devices. Out of the complaints received, 36% identified symptomatic radiolucent lines or were revised for loosening, 28% identified asymptotic radiolucencies, 8% subsided, and 28% were inconclusive.
March 12, 2015-  Zimmer voluntarily recalled the Persona Trabecular Metal Tibial plate that is porous coated and uncemented. The recall affected all lots and sizes C-J Left and
Right. The Food and Drug Administration categorized this as a Class 2 Recall which is defined as “a situation in which use of, or exposure to, a violative product may cause temporary or medically reversible adverse health consequences or where the probability of serious adverse health consequences is remote.”
March 20, 2015-  Therapeutic Goods Administration (the Australian equivalent of the FDA) announced a Hazard Alert regarding Zimmer’s Trabecular Metal Tibial Plate.
March 31, 2015-  Surgeons began sending letters to affected patients notifying them that they received one of the recalled, uncemented Metal Tibial Baseplates. The letters instruct patients to come in for a free initial evaluation where the consultation fee and imaging studies will not billed to their insurance. This letter also steers patients to Zimmer.

Q: How do I know what type of knee implant I have?
A: The operative report and knee implant labels, often called Chart-Stick® labels, from the hospital will
identify the specific devices that were implanted.

Q: What should I do if I received a recalled Zimmer Persona Trabecular Metal Tibial plate?
A: Always consult your doctor or surgeon regarding health-related issues, but if you or someone you care about received a recalled knee replacement, we would like to speak with you right away. DO NOT SIGN A RELEASE FROM THE SURGEON OR ZIMMER. This release will allow Zimmer complete access to your medical records and also allow them to obtain the failed implant in
the event it is removed.

Q: What should I do if I have pain and/or swelling in my knee?
A: If you have pain and/or swelling in or around your knee replacement, you should schedule an officevisit with your orthopedic surgeon to discuss your symptoms and to have radiographs (such as X-ray/Bone Scan/MRI) performed to see if there are signs of radiolucent lines or loosening. Additionally, consider keeping a journal of your symptoms. We have found this to be extremely
helpful in representing clients and it assists us in personalizing your claims when we present them for settlement or trial.

Q: What should I do if I have one of the recalled knees, but do not have any pain or swelling?
A: Even if you do not have symptoms at this time, you should at least visit your orthopedic surgeon for an evaluation and have radiographs performed. You should continue the post-operative plan outlined by your surgeon. Pay close attention to any pain or problems that you believe are being caused by your knee implant.

Q: How would I know if my knee implant is failing or loose?
A: If you are experiencing any of the symptoms described above, you need to see an orthopedic surgeon to be evaluated. The only way to confirm loosening is by radiographs such as X-ray/Bone Scan/MRI. Pain and swelling are symptoms of loosening.

Q: Do I need revision or corrective surgery if I have the recalled knee?
A: Potentially. If there is any evidence of implant loosening or radiolucent lines around the tibial portion of the knee replacement, your surgeon might recommend a revision surgery to remove and replace the uncemented tibial plate. This is a difficult decision that you must make based on your surgeon’s recommendation. The only way to resolve a loose tibial plate is to remove and replace this component part.

Q: What if I already had knee revision surgery?
A: It is important to speak with a lawyer immediately as your statute of limitations has begun to run. Additionally, it is important that the device that was removed and replaced is located and preserved.

Q: Should I communicate with Zimmer or sign anything from them?
A: No. You should contact a lawyer before communicating with Zimmer and avoid signing a release. We do not recommend providing Zimmer with a release or providing them with any of your medical records.

Q: If I file a lawsuit, who would I be suing?
A: We only sue the implant manufacturer for designing, manufacturing, and marketing a defective product. We do not sue the implanting surgeon or hospital.

Q: Why did Zimmer recall the uncemented Persona Trabecular Metal Tibial Plate?
A: According to Zimmer, this component part had higher than expected rates of complaints of radiolucent lines and loosening.

Q: What are the common problems/symptoms?
A: Some common complications are trouble walking, standing or bending, pain or swelling in the knee, a loose feeling in the knee, or a need for a revision surgery.

Q: Who discovered problems and when?
A: On March 12, 2015, the F.D.A. announced that the tibial plate was voluntarily recalled by Zimmer. The recall was due to the growing number of complaints of radiolucent lines and loosening. It is believed Zimmer knew about these problems before the first recall notice in February 2015.

What is the Persona Knee Replacement?

The Persona knee replacement (Personalized Knee System) was introduced to the market in 2012. The product went through the FDA’s 510k process, meaning that the FDA’s approval did not require extensive testing on the product before it was sold. This express approval came due to the product’s similarity to another legally approved product already on the market. The product was sold to patients who needed a knee replacement due to problems stemming from arthritis or avascular necrosis.

Persona was intended to better fit different types of knees by matching the implant to the exact characteristics of the resected bone. The customizable fit was supposed to help patients better reestablish the proper alignment in their knee after the replacement surgery. Persona included a wide variety of different component sizes, shapes, and constraint options so that the best fit could be achieved by some combination of these parts.

However, a little more than two years after the Persona was introduced to the market, the FDA issued a recall notice for the system. The recall notice was issued after reports that patients were experiencing a loosening of the device after the surgery as well as other defects. According to one of the  knee replacement lawsuits filed against Zimmer, the recall affected nearly 12,000 devices that were sold to doctors and hospitals.

Specifically, patients were encountering radiolucent lines in their replacement devices. This occurs when the new knee is not properly seated and there are gaps between the existing bone and the new knee. This means that the knee replacement is not remaining in place, causing patients pain and discomfort. The loosening of the replacement joint can lead to cartilage loss, surface and tissue. A loosened knee replacement ultimately means that patients will have to undergo a subsequent knee replacement in order to receive a new, properly functioning knee. After the FDA recall, Zimmer pulled this particular model of Persona from the marketplace although Zimmer continues to sell other replacements under the Persona brand name.

After the FDA recall, Zimmer has faced hundreds of lawsuit regarding the alleged defects in Persona. This was after Zimmer also defended lawsuits stemming from another knee replacement product named NexGen. These lawsuits began to be filed in 2016, after the product was recalled from the market.

The lawsuits generally allege that Zimmer designed and marketed a defective product. Specifically, the plaintiffs seek to hold Zimmer strictly liable for a defective product. It is alleged that the product was defective because its design caused a propensity that the product would loosen once it was inserted into the knee. In addition, the design resulted in a likelihood that the device would have radiolucent lines, causing the replacement to fail.

According to the plaintiffs, Zimmer knew, or had reason to know, that the design and composition of the Persona knee replacement would cause it to fail in this manner. Zimmer had an obligation to warn patients of these dangers, but failed to do so. As the manufacturer of these products who purportedly tested them prior to selling them to the public, Zimmer should have known of the dangers.

The lawsuits also claim that the Persona knee replacement was not on, defectively designed, but improperly manufactured as well. Had this product been properly manufactured, the knee replacement would have remained in place. In addition, Zimmer is also alleged to have been negligent in both the design and manufacture of this product. The lawsuits all allege a violation of certain specific state consumer laws of the state in which they were filed. These claims are still early in their lifecycle and will not reach trial for several years to come.