There is a strong tie between Paraquat and Parkinson’s Disease, which is now at issue in numerous lawsuits against the product manufacturer. Pesticides and herbicides have the potential to cause serious harm to those who work around them or ingest foods laced with them. These are long-lasting chemicals whose effects can last for long after they are sprayed. Exposure to these harmful chemicals, whether they are ingested or through the air, has caused fatal side effects. Simply stated, while these chemicals may serve a useful purpose for the food supply, they are simply too dangerous to human beings. However, the product makers still sell these products as if they are entirely safe. This is the case for the Herbicide Paraquat. 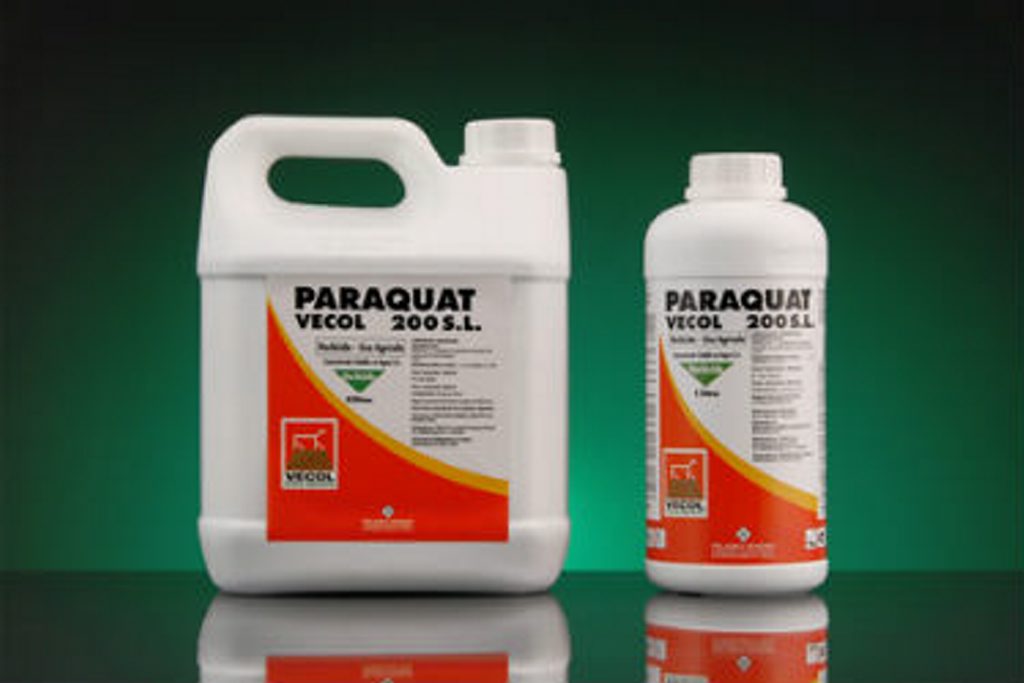 5-27-21- “Parties representing plaintiffs and defendants in Paraquat lawsuits presented oral arguments today to a panel of federal judges, requesting all claims brought by individuals diagnosed with Parkinson’s disease following exposure to the herbicide be consolidated in one U.S. District Court for coordinated pretrial proceedings.” About Lawsuits

5-24-21- “A class action lawsuit filed earlier this month by an Iowa farmer seeks to pursue damages for thousands of farmers and agricultural workers exposed to the herbicide Paraquat who have not been diagnosed with Parkinson’s disease, but now face a risk of developing the devastating condition in the future.” The complaint (PDF) was filed by Doug Holliday in the U.S. District Court for the Southern District of Iowa on May 3, presenting claims against Syngenta and Chevron USA for failing to disclose the Parkinson’s risks from Paraquat-based grass and weed killers.” About lawsuits

3-30-21- “SAN FRANCISCO and CHICAGO, March 30, 2021 /PRNewswire/ — Agrochemical giant Syngenta Group ignored and downplayed known risks of its paraquat-based weed killer Gramoxone despite research over decades linking the chemical to neurological disorders such as Parkinson’s disease, according to the first two product defect lawsuits filed against the company in federal court.  The new lawsuits were filed by Dallas-based Fears Nachawati Law Firm in U.S. District Courts in California and Illinois, alleging that exposure to the herbicide led to the onset of Parkinson’s disease in two men.” PR News wire

3-24-21- “An Illinois woman recently filed a new lawsuit related to Paraquat in the United States District Court for the Southern District of Illinois. She claims that after being exposed to the herbicide, she suffered from serious injuries. She seeks both compensatory and punitive damages.” New York Legal Examiner

2-8-2021- “A man who was diagnosed with Parkinson’s Disease after spraying Paraquat herbicides on farmland has filed a lawsuit in St. Clair County, Illinois. The lawsuit was filed by Michael K., a crop-duster who was “repeatedly exposed” to Paraquat from 1969 to 1981 while spraying farm fields near Edgerton, Wisconsin and Danville, Illinois. The lawsuit claims that he “inhaled, ingested or absorbed” Paraquat, which led to his diagnosis of Parkinson’s Disease in November 2019. He claims that the manufacturers of Paraquat failed to warn him that repeated exposure to the chemical may cause neurological damage. Furthermore, he accuses the manufacturers of failing to protect people who worked in farm fields and orchards where he sprayed Paraquat.” Daily Hornet

Paraquat Is a Highly Toxic Chemicals Used Since 1961

Paraquat is a fast-acting herbicide that is applied to the ground to kill weeds and grass. It is also a deadly toxin, although some claim that it is deactivated in the soil. It is used by farmers all over the world, and it is one of the most commonly used herbicides in existence. It has been used extensively since it was introduced to the market in 1961. Paraquat can only be used by specially licensed people given its extreme toxicity.

The brand name of Paraquat is Gramoxone, but it is also sold under many other brand names. Paraquat is the name of the active ingredient in the product. It is sold by Syngenta, which is an international chemicals giant with headquarters in Switzerland. Syngenta is now owned by the China National Chemical Corporation. The company was originally founded as the spinoff of Astra and Zeneca’s seed production businesses to allow their merger.

Paraquat is used on over 100 different crops worldwide. It is used most heavily on plantations in the developing world on crops such as tea, oil palm and bananas. The compound is cheap and therefore, popular. In spite of the known dangers discussed below, Paraquat usage in the U.S. was actually on the increase until relatively recently. By 2017, its usage had climbed to 10 million pounds annually.

If a victim inhales a large amount of Paraquat the person may have severe injuries. The usual way to get Paraquat positioning is by eating or drinking food or liquid that contains Paraquat.

Paraquat Has Been Banned in Many Other Countries but not the U.S.

Paraquat has a checkered history worldwide. The herbicide is now illegal in many countries around the world. It has been banned in the United Kingdom and throughout Europe. Even the Chinese Ministry of Agriculture and Rural Affairs has recently banned Paraquat in China. However, the Environmental Protection Administration refuses to take that action right here in the U.S. In a 2019 review, the EPA stubbornly ignored much of the scientific evidence from around the world and did not ban the product itself. Instead, the EPA thinks that additional safety regulations would be enough to protect consumers.

This is just the latest in a trend where the EPA ignored dangers and went out on a limb in failing to ban certain products. The EPA continued to allow sales of glyphosate in spite of known cancer risks and its banning around the rest of the world. However, the EPA has ignored science and subjected American workers and consumers to grave dangers. There was a bill proposed to ban Paraquat in the last Congress, but it never came to the floor for a vote.

“Paraquat is not banned in the United States, but it’s restricted to licensed applicators. Because of its toxicity, some lawmakers and activists have fought to get it banned. The Protect America’s Children from Toxic Pesticides Act of 2020 cites that paraquat “causes heart failure, kidney failure, liver failure, lung scarring, and damage to brain cells; and greatly increases the risk of developing Parkinson’s disease. The Protect Against Paraquat Act of 2019 was introduced to require the EPA to cancel the registration for all uses of paraquat, to ban paraquat residue on food and to prohibit the sale and use of existing paraquat stock. So far, legislation to ban paraquat hasn’t been successful.” Drug watch

Why Paraquat Is a Very Dangerous Substance

Now, let’s focus on the reasons why Paraquat has been banned across the world and why it should likely not be allowed for sale in the U.S.:

The main reason why Paraquat has been banned in many countries and should be banned in the U.S. is that the herbicide has been strongly linked with Parkinson’s disease. This is a progressive nervous system disorder that impacts movement. It is a neurological condition that affects balance and leads to stiffness and difficulty walking and talking. While Parkinson’s disease is not necessarily fatal, it will rob a patient of their quality of life.

Scientific research has been strengthening the connection between the usage of Paraquat and Parkinson’s disease. Even low-level exposure to the compound can greatly increase the chances that someone could develop this condition. One study found that Paraquat increases the risk of Parkinson’s by roughly 250%.

Parkinson’s disease is caused by certain gene mutations. These mutations can occur on their own (albeit rarely) or through environmental exposure to certain toxins. It is not uncommon for people who have worked around certain chemicals to eventually be diagnosed with Parkinson’s. Here, the effects of Paraquat can mimic the effect of known mutations that cause Parkinson’s disease. A study by a professor at the University of Guelph documented this connection in human cells for the first time in 2018. While there is not a documented causal link between Paraquat and Parkinson’s, the evidence is strengthening.

Some have even suggested that inhaling the chemical puts it on a direct pathway to the brain. While people may not be sickened immediately, Parkinson’s Disease is caused by a buildup of Lewy Bodies or harmful genetic mutations.

The Number of Lawsuits related to Paraquat Is Growing

Crop dusters and workers who have worked with Paraquat and have been diagnosed with Parkinson’s disease are now beginning to file lawsuits. Recently, an Illinois farmer who was steadily exposed to Paraquat over a 12-year period filed a lawsuit against the maker of the product after he was diagnosed with Parkinson’s Disease in November 2019. This is just the latest in a growing number of lawsuits against companies that have made Paraquat-based products. These lawsuits claim that Paraquat is an inherently dangerous product, and makers failed to warn workers of the dangers of being exposed to it.

There are a couple of factors that make this situation frightening:

As of now, there are at least a dozen lawsuits alleging that plaintiffs developed Parkinson’s disease as a result of Paraquat exposure. One of the first cases was filed in 2017 on behalf of a group of farmworkers and agriculture workers who were sickened. There have not been any legal decisions establishing liability, nor do we know of any settlements. Given the number of people who have been exposed to this toxic chemical over the years, we expect the number of lawsuits to grow.

“The lawsuits allege that exposure to paraquat caused the claimants’ Parkinson’s disease and that manufacturers have known about the risk for decades, Law360 and Law.com reported. Chevron Chemical Company, Growmark, and the Adama group are also named in some lawsuits as manufacturers and distributors of paraquat-containing products. Paraquat is marketed under the brand name Gramoxone by Syngenta and by other companies as Para-SHOT, Helmquat, Parazone, Firestorm, Ortho-Paraquat, Quick-Quat, Devour, and Blanco. Paraquat is classified for restricted use” in the U.S., which means that only licensed applicators can purchase or use it. Considered “highly poisonous” by the U.S. Centers for Disease Control and Prevention, Paraquat has been banned in more than 32 countries including all European Union member nations since 2007.” Med truth

Why You Need to Contact a Paraquat Lawsuit Attorney Today

If you believe that your exposure to Paraquat has caused  Parkinson’s disease, it is vital that you contact an attorney immediately. The reason why is that there is a statute of limitations that applies to your case. You only have a certain period of time from when you knew you were injured to file a lawsuit. Even though your exposure occurred decades ago, you can still file your Paraquat Parkinson’s lawsuit after you have been diagnosed with a disease because that is when your injury happened.

You and your family may be able to receive the financial compensation that you need as you suffer from the effects of a debilitating disease, including: