Those that have been injured or damaged by defective airbags in vehicles have legal recourse by way of a takata airbag lawsuit against the car manufacturers under a product liability theory. Product liability law allows for recovery under several potential theories. They are negligence, tortious misrepresentation, strict liability and warranty. Under the strict liability rule, anyone in the “stream of commerce,” regardless of whether they are the actual manufacturer, may be held liable for a defective product. This liability is automatic when it is shown that the product was defective notwithstanding any efforts that the liable party may or may not have made to detect or prevent the defect. If you are looking to file a Takata airbag lawsuit to get justice and compensation then contact a Takata airbag death lawyer. Airbag deaths are a serious matter and a local wrongful death car accident lawyer will be in over his or her head dealing with a complicated GM airbag lawsuit. 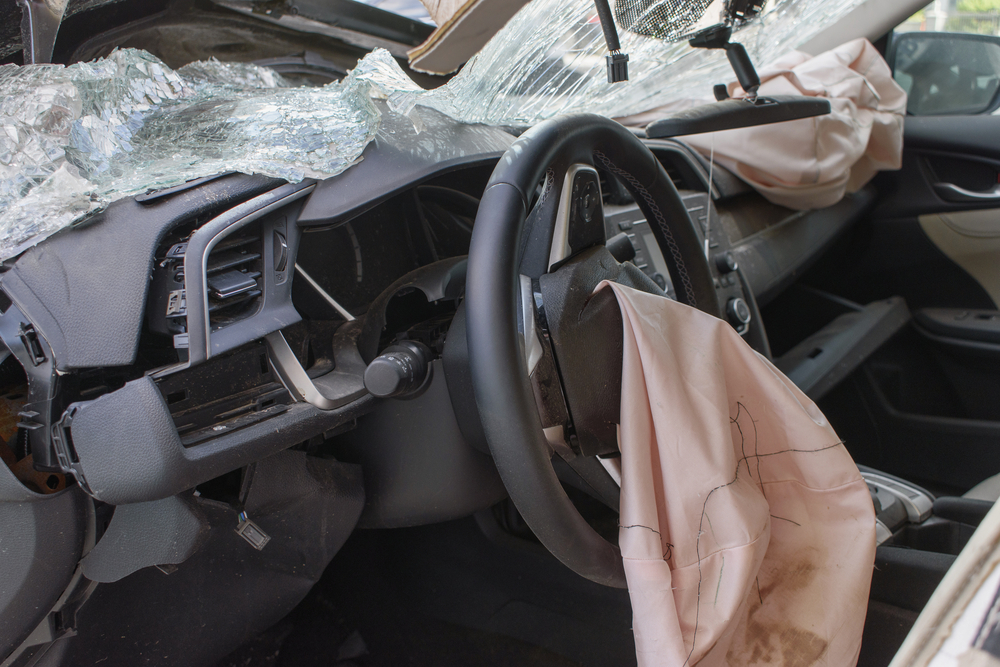 Update- April 28, 2022- “General Motors is recalling 2,687 of its SUVS from model year 2015 over concerns they contain airbag inflators that can explode and cause injury.  The recall affects model year 2015 Buick Enclave, Chevrolet Traverse and GMC Acadia SUVs, according to a recall notice published by the National Highway Traffic Safety Administration on Apr. 14.  GM says it used “part traceability data and manufacturing records” to identify the SUVs that may be equipped with “a suspect airbag inflator.”  Top class actions

4-22-21- “A South Carolina driver died after a Takata air bag inflator burst during a crash, officials said. The person was behind the wheel of a 2002 Honda Accord when the car wrecked in January, according to the car company. During the crash, the air bag inflator “ruptured” and injured the driver, who later died, Honda said Wednesday in a news release. The fatal wreck happened in Lancaster County, along the North Carolina border and south of Charlotte.” The State

3-10-2021- “Mercedes-Benz USA was sued in Florida by a driver and passenger who say they were injured by an exploding Takata airbag inflator in what may be the first such claim of its kind against the unit of Daimler AG. Nermina Alimanovic and Elvir Islamovic allege that when the airbag in their 2012 Mercedes-Benz C-250 ruptured during a collision in November, it sent shrapnel into their faces and bodies.” Bloomberg law

“A defective Takata airbag killed a Honda driver in August, marking at least the 17th death caused by the shrapnel-shooting airbags in the U.S. According to Reuters and Associated Press reports, an unnamed driver was killed when the airbag in a 2002 Honda Civic exploded after a crash in Mesa, Arizona, on August 20. No other details of the crash were available. This particular car is one of seven “Alpha” Honda models from the early 2000s with frontal airbags that are most likely to rupture during a crash and shoot shrapnel from the inflator into the car’s occupants. The Alpha cars have a 50 percent chance of their airbags failing, according to the National Highway Traffic Safety Administration (NHTSA), which has led a recall on 56 million Takata airbag inflators since 2013 that is the largest automotive recall in U.S. history.At least 26 people have died worldwide and several hundred have been injured from the airbag inflators. Several have occurred in Malaysia and Australia. Nearly all have occurred in older Honda vehicles, although two deaths in the U.S. have occurred in Ford vehicles. In June 2018, another driver in Arizona was killed in a 2002 Civic. ” Car and Driver

12/27/19- “After many years, lawsuits, recalls, injuries, deaths, and reports of malpractice by both manufacturers and automakers, the Takata airbag saga has become a massive, sprawling thing that’s almost too terrifying to try to keep up with. If you stopped paying attention, don’t, because it’s far from over. In a situation where the story has become so massively complicated that it almost distracts from how bad things are and have been—the trail of the many documented Takata-related problems can be traced back roughly two decades—drivers continue to sue, alleging injuries related to the airbags. Those lawsuits are a reminder of the human toll the industry’s transgressions have taken. The Takata story is a long and exhausting one, from the millions of recalled vehicles to the triple-digit injury counts and double-digit death toll. But the main theme is that the bankrupt Takata spent years making faulty airbag inflators with the potential to explode and spew shrapnel in order to save some cash, and at least some automakers knew of the threat. Still, the inflators went into cars, and the cars went years without recalls. Some vehicles have been recalled multiple times since the overdue recalls began, and the most recent Takata recall we wrote about was this month.”  Jalopnik

Airbags in certain models of Japanese cars that were sold starting in 2002 have been shown to be defective. Takata is the major manufacturer of airbags that were used in the production of these cars. The airbag’s inflator is the key component in the deployment of the airbag. In these models, the inflator ignited with such force that it injured occupants of the vehicles. This was caused by a defect in the manufacturing of the airbag. Takata manufactured the airbags using an ammonium nitrate-based propellant without also using a chemical drying agent.

Moisture and temperature degraded the propellant

The effects of moisture and temperature degraded the propellant such that when the airbag deployed, it did so with violent force that it caused sometimes catastrophic injuries. Sometimes, the airbag deployed without any impact whatsoever, causing accidents and other injuries. This deployment was accompanied by the expulsion of various shrapnel and metals with explosive force that gravely injured vehicle occupants. This defect occurred in tens of millions of airbags, sparking a massive and complex product recall. Before the issue was addressed, the defective airbags caused at least 23 deaths internationally, 15 of which were in the United States. Further compounding the problem, Takata officials manipulated test data results to hide the defects and lied to regulators. The evidence shows that Takata not only knew about this issue, but took steps to hide it as well.

Since auto manufacturers are also in the “stream of commerce,” they have been subjected to large class action lawsuits seeking recovery for injuries and damages. Multiple suits have been filed in various jurisdictions. The first major suit was filed in 2014 and was filed as a multi-state class action. The suit alleged that it was not subject to any sort of statute of limitations because Takata engaged in a practice of fraudulently concealing the defect. Thus, it would not have been possible to discover the existence and the extent of the defects before the statute of limitations tolled. According to the complaint, the Magnuson-Moss Warranty Act was violated by Takata’s actions and the manufacturers’ selling of these vehicles. This statute provides a federal law cause of action when either a written or implied warranty is violated. Here, customers should have expected that the vehicle that they purchased should have worked for its intended purpose. In addition, the complaint alleged fraud as well as numerous violations of various state consumer protection laws.

Another major suit was filed a few months later. Patricia Mincey, the plaintiff, was a Florida woman who sustained horrific injuries when her airbag inflator exploding during the course of a minor vehicular accident. This lawsuit took a slightly different approach to seeking relief for the defective airbags. According to the complaint, Mincey’s estate followed a traditional products liability approach in alleging strict liability on the part of both Takata and the manufacturers. The complaint alleged that Takata failed to use due care in their manufacture and design of the airbags and failed to incorporate reasonable safety standards. In addition, the complaint charged that the defendants acted negligently and fraudulently to conceal the defects in the airbags.

For Takata, this entire saga has resulted in the corporation’s bankruptcy. This makes potential claimants creditors of the corporation. However, it also means that the only “deep pockets” that may compensate damaged customers are now the auto manufacturers. Takata will be creating a trust fund out of its remaining assets to compensate its customers. After the bankruptcy proceedings, Takata will no longer be operating as a going concern. In addition to bankruptcy and litigation, Takata also faced enforcement actions brought by 44 state attorneys general alleging deceptive trade practice. Takata settled all of these charges.

Many of these cases have recently settled. In the Mincey case, Takata settled right before the time when its president would have been deposed. In addition, some of the large class actions against the automobile manufacturers have settled. For example, BMW, Mazda, Subaru and Toyota have agreed to pay a combined total of $553 million to settle the claims brought against them. Car owners have received settlement notices, alerting them of the fact that they can receive a settlement payment. Automakers had been seeking payment from Takata to compensate them for their liabilities to car purchasers. However, as part of a settlement, they have dropped their claims against Takata and agreed to compensate car owners.

According to the NTHSA, the defective airbags are still an ongoing issue. Automakers cannot recall vehicles fast enough in order to repair the faulty airbags. For millions of drivers, the defect remains in the car until the airbags are replaced. This subjects many drivers to ongoing danger for the time being. This is the largest product recall in United States history which is compounded by the complexity of the issue. This matter has drawn the attention of the NTHSA and the United States Congress as speed is of the utmost important in executing this recall given the fact that owners are driving these cars with a ticking time bomb. Since these conditions tend to be aggravated by heat and humidity, those in southern states are particularly vulnerable. In the meantime, automakers will remain liable for any injuries or damages sustained by vehicle occupants until their  faulty airbags can be replaced.