In the latest legal blow to Johnson & Johnson* and its subsidiary Janssen, the company has been sued for eye damage caused by Elmiron. Elmiron is medication to treat bladder pain and discomfort. Elmiron medication (pentosan polysulfate sodium or PPS) is alleged to cause retinal injuries and vision loss.  The eye problems caused by Emiron are both severe and irreversible. Some of the side effects of Elmiron include: eye pain, blurry vision, vision loss, difficulty reading, difficulty adjusting to dim lights, blind spots, glare, spots in field of vision and dull or less vivid colors.  The initial Elmiron lawsuits were filed in 2021. Observers are now expecting a large number of Elmiron vision loss lawsuits to be filed against Johnson & Johnson. The company is already facing lawsuits for its other product such as talc powder, Risperidone and its opioid painkillers. As of February 2022, there are consolidated lawsuits against Janssen in both Federal and State Courts in New Jersey (Federal MDL and State MCL).

Elmiron is a prescription medication prescribed by physicians to treat cystitis occurring in the bladder. Cystitis is a an extremely painful syndrome of the bladder. The vast majority of  people taking Elmiron are women- usually women who are perimenopausal. “The drug Elmiron, which treats interstitial cystitis, bladder pain and osteoarthritis, is being linked to permanent eyesight damage, including macular degeneration and pigmentary and retinal maculopathy. A number of studies dating to 2018 have revealed risks associated with long-term use of Elmiron. Mass tort law firms are looking for claimants now. Elmiron was developed by Janssen Pharmaceuticals (a Johnson & Johnson subsidiary).” Versus 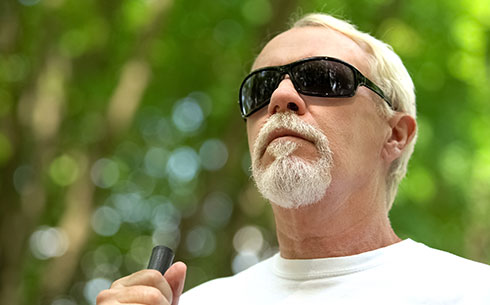 Update- 2-10-22-  The State Supreme Court in New Jersey established a State Court Multicounty Litigation in NJ.  The New Jersey Elmiron lawsuit shall be heard and determined in Bergen County, New Jersey. Bergen County is where Janssen is located.  Janssen’s address is 23 Green Way Mahwah, NJ 07430. This is a completely separate consolidated lawsuit from the MDL consolidated lawsuits in federal Court in New Jersey.  A state court mcl is a state version of a federal MDL. “This Notice is to advise that the Supreme Court, after considering the application and the comments received, has determined to designate cases involving allegations against Janssen Pharmaceuticals, Inc., Johnson & Johnson, Janssen Research & Development, LLC, Janssen Ortho, LLC, and Ortho-McNeil Pharmaceuticals, LLC as multicounty litigation. The Court has assigned this MCL to Bergen County for centralized case management by Superior Court Judge Rachelle Harz.” NOTICE TO THE BAR MULTICOUNTY LITIGATION-DESIGNATION OF ELMIRON®LITIGATION AS MCL

1/27/2022- “The parties have identified 20 bellwethers, and plaintiff depositions are taking place. The parties shall continue to meet and confer regarding bellwether discovery, including the scheduling of non-party doctor depositions, and shall submit any issues to Judge Polifroni.” MDL CASE MANAGEMENT ORDER NO. 23

3/16/21- “A Kentucky woman recently filed a new Elmiron lawsuit in the U.S. District Court for the District of New Jersey. She claims that after using the medication, she suffered from vision loss. Her case joins the other federally filed Elmiron lawsuits that were centralized in New Jersey on December 15, 2020.” New York Legal examiner

2/11/21-  An important study was published in Clinical Ophthalmology.  This study was titled, “Maculopathy Secondary to Pentosan Polysulfate Use: A Single-Center Experience.”  This important study carefully  evaluated substantial data from clinical patients who were sadly exposed to Elmiron. These patients were evaluated in a ophthalmology clinic at Northwestern University from 2002 to 2019. Scientists looked at  medical records which included  data related to visual acuity, ocular conditions as well as the length of  pentosan polysulfate sodium exposure.

12/16/2020- “A federal judicial panel has transferred nearly 130 lawsuits to New Jersey brought over Janssen Pharmaceuticals’ pharmaceutical drug Elmiron. The U.S. Judicial Panel on Multidistrict Litigation appointed U.S. District Judge Brian Martinotti to oversee the lawsuits, which allege that Elmiron, used to treat chronic bladder infection called interstitial cystitis, causes eye problems. Plaintiffs lawyers initially had split over whether the cases should go to New Jersey or Pennsylvania. “Several defendants are based in New Jersey, and relevant witnesses and documents likely will be found there,” wrote the panel’s chairwoman, U.S. District Judge Karen Caldwell of the Eastern District of Kentucky, on Tuesday. “Defendants and many plaintiffs support centralization in this district.” Law

11/09/2020- “As attorneys across the country fight over whether to consolidate litigation over the bladder infection medication Elmiron into a single federal court, a district judge in Pennsylvania has decided that claims seeking medical monitoring over the medication can’t be litigated as a national class action.” Law

9/3/2020- “The second plaintiff is from California and filed her case in the District of New Jersey. Like the first plaintiff, she claims that she was diagnosed with IC and was prescribed Elmiron, which she took for about four years from 2013 through 2017. During that time, she received no warnings about any risk of retinal damage or vision loss. Now, she suffers from toxic maculopathy, retinal damage, blurred vision, distorted vision, and other visual symptoms. She blames these issues on her ingestion of Elmiron and seeks damages from the drugmaker.” New York Legal Examiner

6-9-2020- A prominent law firm “filed a products liability lawsuit against the manufacturers of a prescription drug Elmiron (pentosan polysulfate sodium) for, among other things, failing to warn plaintiff Valerie Hull of the potential risk of developing serious eye and vision-related injuries.  The complaint was filed on behalf of Valerie Hull, a South Carolina resident, whose case was documented as “patient zero” in a published 2018 study conducted by Emory Eye Center in Atlanta, Georgia.” The lawsuit “names Janssen Pharmaceuticals, and several other Johnson & Johnson entities as well as Teva Branded Pharmaceutical Products R&D, Teva Pharmaceuticals, and Teva Pharmaceutical Industries Ltd., as the defendants who manufactured, marketed, and distributed Elmiron. The case is Hull vs. Janssen Pharmaceuticals Inc., et al., Case No. MIDL003646-20.” PR NEWSwire

8/12/2020-  “On Aug. 12 two women filed lawsuits against manufacturers of Elmiron, the only oral medication approved by the U.S. Food and Drug Administration to treat interstitial cystitis, also known as painful bladder syndrome. The Elmiron lawsuits were filed by Clara Johns and Shirley Ruth Levy in the U.S. District Court for the District of New Jersey against units of Johson & Johnson, Bayer and Teva, as reported by Law360. Johns and Levy allege that the drug manufacturers knowingly withheld information about harm caused by long-term use of Elmiron such as blurred and distorted vision and retinal damage, and failed to alert physicians or patients of these risks.” Med truth

“Elmiron product labeling does not include any language describing pigmentary maculopathy or any other form of maculopathy. The only references to any form of ocular or vision-related disorders are located within the Adverse Reactions section, referring to nystagmus, conjunctivitis, optic neuritis, amblyopia, and retinal hemorrhage observed in premarket clinical trials. The labeling includes no relevant warnings and identifies no relevant adverse events observed in the post-marketing setting” Med Quest

If you have taken Elmiron and have experienced any problems with your eyes and vision, you may be entitled to significant financial compensation. You should contact a Elmiron eye damage lawyer immediately to learn more about how you can file your own Elmiron vision loss lawsuit.

Elmiron in Europe and the UK

Elmiron has been on the market since it was approved by the FDA in 1996. European regulators only recently approved it. There have been concerns raised about the benefits of the drug versus the steep cost. In Europe, cost matters when it comes to approving the drug for use. The U.K. distributor was forced to make price concessions before it was approved for use in the U.K. In the U.S., the drug does between $150-$250 million in sales annually. Given the expensive cost of the drug, this means that roughly one million people in the U.S. take the medication.

Are there any warnings on the Elmiron’s Label?

Authorities in Canada mandated similar Elmiron warnings in October 2019. The Canadian government stated on it’s website, “The risk of pigmentary maculopathy has been included in the Warnings and Precautions, Post-Market Adverse Drug Reactions, and Consumer Information sections of the Canadian product monograph for Elmiron.  The Canadian health authorities even provided a “Key messages for healthcare professionals:

Issues Begin to Be Discovered By Researchers in 2018

The first issues with Elmiron began to be noted by researchers at the end of 2018. A research paper noted that long-term users of the drug experienced atypical maculopathy at a higher rate than usual. This makes sense because the retina may be one of the first areas of the body to suffer when a patient is exposed to medicine toxicity. This occurs in other drugs that are known to be possibly toxic such as malaria drugs. The researchers did a follow-up study the next year. They looked at 219 patients who took Elmiron for the long term. Their results supported their initial conclusion that there may be a connection with Elmiron and vision loss.

Johnson & Johnson made no changes to the warning label

Researchers studied 140 people who have been known to have taken over 5,000 pills of Elmiron. They were able to examine 91 people. Of this group, 22 exhibited symptoms of vision loss. This is an alarming ratio that shows that nearly one-quarter of the sample group who were long-term users suffered damage to their eye. After the initial studies, multiple researchers launched their own studies and reached the same conclusions. However, even after the study results were released to the public, Johnson & Johnson made no changes to the warning label. One lawsuit notes that the company made changes to warning labels in foreign countries to warn patients of the exact same side effects of which they failed to warn U.S. patients.

After the initial research findings were published, plaintiffs began to step forward with their claims of vision loss and damage to their eyes. One particular plaintiff filed a lawsuit in Connecticut in March 2020. She claimed that she took Elmiron for nearly 15 years. Believing the drug to be without major side effects, her doctors progressively prescribed more to her and increased her dosage. However, in 2019, she was examined and found to have suffered significant vision loss.

This plaintiff is one of many that are now filing Elmiron vision loss lawsuits. Many are alleging the following grounds of product liability in their lawsuits:

Each Elmiron vision loss lawsuit that has been filed has variations of the same allegations.

Where the Elmiron Lawsuits Stand Today

The Elmiron eye damage lawsuits have just recently been filed in different federal courts. Since the lawsuits are just in their infancy, discovery and motions have not yet happened. In many cases, the defendants have just filed their answers to the allegations. Plaintiffs are just beginning to come forward as the initial lawsuits have been filed. It is possible that the Elmiron lawsuits will be rolled into a multi-district lawsuit so all cases can proceed with common discovery. Right now, cases are still being filed across the country.

What Should I Do if I Have Taken Elmiron?

The first thing that you should do is to see a doctor to have your vision checked. You may be taking risks with the statute of limitations if you wait to have your vision examined. Make sure that you get extensive documentation from the eye doctor of any condition that you have along with their medical opinion of what caused the Elmiron eye damage. You should continue to get annual checkups so you can track your vision.

Even before you go see an eye doctor, you should consult with an Elmiron eye damage product liability lawyer. The attorney will tell you what documentation you need and will help you assemble what you need in order to file your lawsuit. Then, the Elmiron lawsuit attorney will draft your complaint and represent you as you seek to hold Johnson & Johnson and Teva responsible for any damage to your eyes. You may be entitled to substantial financial compensation for your Elmiron-induced vision loss if you act now.