Laparoscopic power morcellators are a surgical medical device. “Laparoscopic power morcellators are Class II medical devices used during laparoscopic (minimally invasive) surgeries to cut tissue into smaller pieces so the tissue can be removed through a small incision site (typically 2 cm long or less).” FDA Enduring gynecological surgery is a horrific, painful experience. Learning that the surgical procedure utilized at the hospital could have caused a devastating diagnosis of uterine cancer is devastating. In 2017, the Federal Drug Administration issued a revised assessment indicating and discouraging that laparoscopic power morcellation (LPM) be used in hysterectomy and myomectomy surgical procedures. The FDA was concerned that LPM could cause a greater chance of spreading uterine tissue that could hold cancer. Many victims are now wondering whether there will be power morcellator lawsuit settlements. 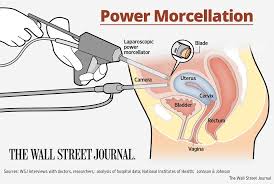 How a Morcellator Works

Laparoscopic power morcellators are used during surgical procedures. Their purpose is to take large masses of tissue and make them smaller. The surgeon makes a small incision and can remove the tissue through the incision site. The laparoscopic power morcellator works by using sharp edges to finely cut the tissue. It can be inserted through small incision and reaches the site of the tissue since it is a long and hollow cylinder that has cutting jaws on the end of it. While many of the common uses of these laparoscopic power morcellators involve gallbladder and spleen removal surgeries, there were also uses for other surgeries. As applicable here, these devices have been used in procedures such as a hysterectomy and surgery to remove uterine fibroids. The purpose was to shorten recovery times and make it a less difficult procedure.

Update- 1-4-2021- “A boxed warning and more explicit and detailed information about the risks associated with laparoscopic power morcellators should be included in labelling of the gynecologic surgery device, according to newly finalized guidance from the US Food and Drug Administration (FDA). ..This final document updates an earlier 2014 guidance to recommend that manufacturers of laparoscopic power morcellators (LPMs) include more specificity about how the risk of the devices increases with the age of patients. Labels should now also give detailed information about the risk of spreading benign uterine tissue and make clear that LPMs should always be used with containment systems. (RELATED: Fears over device surveillance amid talk of deregulation, Regulatory Focus 20 June 2017)” RAPS

2-25-2020- “The US Food and Drug Administration (FDA) has announced several new steps designed to make the use of laparoscopic power morcellators (LPMs) safer in gynecologic surgeries. The agency granted marketing authorization for updated labeling for the PneumoLiner morcellation tissue containment system; released draft guidance recommending the addition of specific safety information to the product labeling for LPMs; and issued a Safety Communication recommending that an LPM only be used in certain gynecologic surgeries with a containment system that is compatible with the morcellator.” Medscape

What is a Laparoscopic Power Morcellator?

“Laparoscopic power morcellators are Class II medical devices used during laparoscopic (minimally invasive) surgeries to cut tissue into smaller pieces so the tissue can be removed through a small incision site (typically 2 cm long or less). These devices are commonly used in gallbladder, kidney, liver, and spleen removal surgery. They are also used in hysterectomy (surgical procedure to remove a women’s uterus) and myomectomy (surgical procedure to remove uterine fibroids which are noncancerous growths in the lining of a women’s uterus).” FDA  “Laparoscopic surgeries are associated with shorter post-operative recovery time and a reduced risk of infection compared to hysterectomy or myomectomy done through an abdominal incision.” Id.

Although there are side effects for gynecological surgeries, the device can have some positive effects for patients. There are several different companies that manufacture morcellators. The two largest makers of the product are Karl Storz GmbH and the Ethicon subsidiary of Johnson & Johnson. Ethicon ceased selling morcellators in 2014. There are several other manufacturers of the product who continue to sell it.

The use of this device for hysterectomies and myomectomies (surgery for uterine fibroids) has caused some severe complications for women who have received the procedure. The major difficulty is that it is difficult sometimes to distinguish between cancerous tissue and a uterine fibroid before the procedure. Given the similarity between the two, telling the difference may often be impossible until the actual tissue can be analyzed. This means that when doctors insert the power morcellator and use it to reduce tissue, they sometimes cannot tell what the actual risks are. If the tissue that is being ground for removal is cancerous, the procedure runs the risk of dispersing cancerous tissues outside of the affected area. In other words, the morcellator takes cancerous tissue, blasts it and disperses it to other places in the body where it takes root and grows into a dangerous and often fatal type of cancer.

In the wake of reports of the possibility that laparoscopic power morcellators can increase risk of cancer, the FDA conducted an investigation. The FDA issued a safety communication in 2014 that detailed the risks associated with this procedure. The FDA estimates that between 1 in every 225 and 1 in every 580 women undergoing gynecological surgery may have undetected cancer, causing this risk. Among other things, the FDA required a new boxed warning and for treatment providers to consider other options before using a laparoscopic power morcellator. In the wake of this, Ethicon exited the market for this product. The FDA has sought to discourage the use of this product for several different types of procedures, including hysterectomies. The FDA also recommended several ways, including design and implementation, where this product could be made safer. Now, several companies manufacture morcellators with the use of a containment bag that is intended to prevent cancerous tissue from spreading around the body after it is reduced by the morcellator.

“Morcellation means cutting an object or tissue into smaller pieces for removal. When it comes to gynecology, it could mean cutting up the uterus, polyps, tumors, or fibroids so they can be removed through a smaller opening.” https://www.hystersisters.com/vb2/article_557161.htm

“Surgeons have several different options for morcellation tools. There are power tools, such as the specifically-designed morcellator, and then there are the manual tools like the scalpel. The decision mostly depends on the surgeon’s preference and your specific situation. Some tools have the ability not only to cut, but also to core and extract tissues. Morcellation can either be done in a closed environment, such as a bag, or in an open environment such as the uterus, pelvic cavity, or abdominal region.” Id.

There are two different means that patients have for obtaining compensation for any harms that they may have suffered from laparoscopic power morcellators. The first is a suit against the manufacturer of the device for any defects in the product.  This lawsuit could lead to a power morcellator lawsuit settlement. The second is a medical malpractice suit against the doctor, especially given that the doctor may not have been able to distinguish between a uterine fibroid and cancerous tissue.

“FDA’s Center for Devices and Radiological Health (CDRH)’s most recent assessment of using laparoscopic power morcellators (LPM) to treat presumed uterine fibroids confirms concerns outlined in our 2014 safety communication which discouraged the use of these products for that use. Women with unsuspected uterine sarcoma who undergo morcellation of presumed benign fibroids are at risk for mechanical spread of cancerous tissue and worsened clinical outcomes. As part of the FDA’s ongoing efforts, CDRH conducted an updated review to assess:

“In April 2014, the Food and Drug Administration (FDA) had issued a safety communication that estimated that 1 in 350 women undergoing a hysterectomy or myomectomy to treat fibroids has unsuspected uterine sarcoma and there is a risk that performing a laparoscopic power morcellation can spread the cancerous tissue, “significantly worsening the patient’s likelihood of long-term survival. The FDA recommended the procedure not be used in women with suspected or known uterine cancer, but it did not recall or ban the use of the device that had been used since 1995.” ama

When surgeons had wanted to perform procedures on women through minimally invasive means, they had opted for a procedure that is called laparoscopic power morcellation. This was intended to achieve the same results as a surgery with an incision, while resulting in an easier recovery period. However, there have been unintended consequences that have accompanied the use of this procedure. In some instances, it has been alleged to have increased a woman’s risk of a cancer diagnosis in the wake of the procedure. This had led to Food and Drug Administration warnings about the safety of the product and procedure. There have been numerous lawsuits that have been brought against both the manufacturer of the product and the doctors who have performed the procedure. If you or someone in your family have undergone this procedure and have been diagnosed with cancer, you should contact a Laparoscopic Power Morcellation lawsuit attorney immediately. Many victims are wondering about power morcellator lawsuit settlements.

Suits filed against the manufacturers of these morcellators

Johnson & Johnson has sought to settle the lawsuits that have been brought against it. In addition, Olympus Corp., another manufacturer of the product, has also settled many of the cases that have been brought against it. There are still hundreds of cases pending in front of courts, although none have gone to trial yet.In addition, there is also the possibility of filing a claim against the doctor who conducted the surgical procedure. This is arguably medical malpractice given that the cancerous tissue was undetected by the doctor prior to the procedure. If you can prove the doctor was negligent by proceeding to use a laparoscopic power morcellator when the patient had undetected cancer, then you can recovery under a malpractice theory as well. Of course, a doctor can always be joined to a product liability lawsuit as well since the doctor was part of the transaction chain that resulted in a defendant coming into contact with a defective product. It is not your responsibility to prove exactly who is liable, only that you received a defective product. It is for the court to decide exactly who bear the legal liability for that defective product.

Diagnosed with cancer after your procedure