For decades, firefighters have been provided foam when they have been sent to deal with fires. They were led to believe that these substances were safe and were the best thing to put out the fire. However, firefighters and the people living in the areas where the foam has been used find themselves in danger of developing cancer because of the chemicals that are a part of the foam. As a result, scores of lawsuits have been filed against the companies that made Aqueous Film Forming Foam (AFFF). If you believe that you became sick as a result of firefighting foam, you can file your own AFF lawsuit. 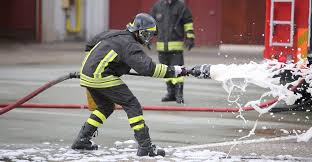 Do I qualify for a Firefighting Foam lawsuit payout?

What Is Firefighting Foam?

Specifically, firefighting foam is known as Aqueous Film Forming Foam (AFFF). This describes the way that the substance works to put out a fire. It is used anywhere that there is a potential for major fires. You rarely see AFFF used in a residential fire. You would see it used in airports or places when there are chemicals or the potential for a major blaze present.

When you see firefighters spraying foam on fires to help put them out, that foam is actually an intricate mix of chemicals. Firefighting foam looks harmless, but the truth is the opposite. To understand the danger associated with this foam, it is important to know what the ingredients are and how they are harmful.

Most of the ingredients in firefighting foam consist of water and air. On the surface of it, this does not look very dangerous. However, the third ingredient is where the problem lies. This ingredient is called the foam concentrate. This contains a mix of different chemicals. The issue is that some of these chemicals belong to a family of substances known as PFAS. Specifically, firefighting foam contains  perfluorooctane acid (PFOA) and perfluorooctanesulfonic acid (PFOS). As you will see below, these can cause health problems for generations.

Dangerous chemicals are necessary to envelop the fire

AFFF works by literally smothering the fire. Firefighters spray the foam over the fire. The foam is intended to create a thin layer that blankets the fire. This prevents the fire from emitting vapors. Eventually, the fire is deprived of the oxygen that it needs to keep going and would die out. However, in order to achieve this effect, dangerous chemicals are necessary to envelop the fire. They need a certain strength in order to form the layer that covers the fire. Specifically, they need to be resistant to heat to do their job in extreme temperatures.

10/11/2020- “A vendor testing equipment at the Anne Arundel County Fire Training Academy in Millersville in September unintentionally released aqueous film-forming foam into a storm drain, which flowed into Bear Branch, blanketing the water. About 100 dead black-nosed dace, possibly suffocated by the foam covering the water’s surface, were found after the Sept. 24 incident, Maryland Department of Environment spokesperson Jay Apperson said. The fire department conducted testing in Bear Branch and found low levels of PFAs, a class of human-made chemicals that persist in the environment and build up over time. PFAs, or per- and polyfluoroalkyl substances, have been used in items like frying pans, water-resistant clothing and firefighting foam since the 1940s and scientists have tried to study their health effects.” Baltimore sun

11/2/2020- ” Wisconsin environmental regulators have approved an emergency rule that restricts the use of firefighting foam and lays out steps to treat PFAS chemicals. PFAS are human-made chemicals that research suggests can cause health problems in humans. The chemicals have been used for decades in a range of products, including firefighting foam and stain-resistant sprays.” Insurance Journal

10/18/2020- In Re: Aqueous Film-Forming Foams Products Liability Litigation (MDL No. 2:18-mn-2873-RMG) Numerous manufacturer of Aqueous Film Forming Foam (AFFF) asked the Federal Courts to consolidate approximately 80 AFF lawsuits that were file across the United  States. There was a myriad of litigation and lawsuits pending in various jurisdictions. The manufacturers were seeking to consolidate all the lawsuits pending in Federal Court into Multidistrict litigation.  This  consolidation specifically included individual firefighting foam lawsuits as well as personal injury lawsuits and class actions. Some of the lawsuits were assorted lawsuits filed by cities and town alleging expenses related to well head treatment. On 10/18/2020, The Judicial Panel for Multidistrict Litigation (JPML) listened and considered verbal arguments concerning the consolidation motion.

9-22-2020-“Michigan Attorney General Dana Nessel joins a group of government officials to hire private law firms to pursue PFAS suits on a contingent basis, and Michigan becomes just the second state to extend the PFAS lawsuit statute of limitations.  Per- and polyfluoroalkyl substances, more commonly referred to be their acronym, PFAS, are a collection of thousands of manmade chemical compounds that are widely used in countless consumer products, such as firefighting foam, clothing, and non-stick cookware.” National Law Review

12-17-18- The JPML ruled that all Aqueous Film-Forming Foams Products Liability lawsuits in the United States – be joined and put into a consolidated lawsuit commonly referred to as an MDL. The JPML ordered that the presiding Justice for the MDL be put in the capable hands of honorable Judge Richard Gergel of the Federal Court District of South Carolina.

The AFF lawsuits are pursued against companies that make aqueous film-forming foam (AFFF)  which contain PFCs.  The manufacturers allegedly were engaged in the design, sale of,  and or manufacture of AFF to  various organizations.  These businesses and entities include; various airports, industrial processing plants that manufactures (or otherwise processes) chemicals to be used by: fire authorities, organizations which promote fire safety, and industrial type facilities.

These organizations and facilities are alleged to have  purposefully discharged the AFF into the natural world and sadly contaminate water that collects on the surface of the ground as well as water intended for drinking. The fire foam lawsuits assert that victims were exposed to elevated amounts of PFCs. Those victims have a greater likelihood to contract cancer and other severe complications.

These side effects could include:

The Makers of Firefighting Foam

There are many large chemical companies who have been in the AFFF market for decades. Some of the bigger players in the field include:

These are just a handful of the possible defendants in your AFFF case. You should learn the company that made the firefighting foam that polluted the area in which you live or that you used on the job.

The Dangers of PFAS

PFAS chemicals are called “forever chemicals,” and for good reason. Once these chemicals are introduced into an area, they are extremely difficult to remove. When they make their way into the environment, their half-life is approximately 92 years. If they enter the human body, these chemicals can last for as long as eight years. PFAS chemicals can be found in a number of different places. One of the most common areas that will be contaminated with PFAS is the water supply. Nearly all water supplies in the United States contain some levels of PFAS.

The problem with PFAS is that it is a possible carcinogen. Europe has recognized the dangers that are inherent to PFAS chemicals and has banned the substances. However, the U.S. has not taken steps to fully ban PFAS. As a result, manufacturers make products that contain this harmful chemical that can last for decades.

The Use of Firefighting Foam

There are two different types of people who can suffer the effects of firefighting foam. The first is firefighters who have been using this substance on the job for years. Exposed to these chemicals in large substances, their bodies can see a buildup of PFAS chemicals. Even people who live in the surrounding area where PFAS has been used are in danger of suffering side effects. This is important for people who lived on military bases where continuous firefighting drills were held. Studies showed that the chemicals from the foam polluted the area for decades as they seeped into the ground and permeated the water supply.

The Department of Defense still continues to use these dangerous substances today. Since the EPA has done very little to address the problem of AFFF and PFAS chemicals, people are still being exposed to the possibility of side effects even today. Congress has directed DoD to phase out the use of AFFF, but this will not fully happen until 2024.

The most common side effect that people will experience from AFFF exposure is cancer. There are a number of cancers that can develop in people who have had prolonged exposure to the toxic substance. Here are some possible types of cancers that have been connected to AFFF:

What the AFFF Companies Are Accused of Doing

Plaintiffs across the country have filed Fire Fighting Foam lawsuits against the companies that make firefighting foam. Like many product liability cases, these lawsuits nearly all allege that the AFFF manufacturers knew full well of the danger of the products that they were selling. The lawsuits allege that these companies were aware of the harm for decades yet continued to market unsafe products when the companies should have either pulled them from the market or warned the public of the dangers. Some of the evidence points to the fact that these companies even were aware of the dangers as far back as the 1960s.

Here, if you were affected by PFAS on a military base, you are not allowed to sue the U.S. government, Instead, you would file a lawsuit against the company that made the AFFF. For example, the chemical giant 3M has been sued by numerous plaintiffs that allege that they suffered from contaminated drinking water near the military base caused by AFFF. Each of the companies that made AFFF have been sued by numerous plaintiffs. As of now, all of the AFFF lawsuits have been consolidated into a multidistrict litigation that is in federal court in South Carolina. As of this writing, there have been 785 lawsuits filed that are a part of the multidistrict litigation.

Since AFFF will continue to have environmental effects for years to come, it is likely that the number of cases will continue to grow. While the multidistrict litigation is still in its early stages, the cases are proceeding towards discovery.

What You Can Do to File a Firefighting Foam Lawsuit

If you believe that you were exposed to AFFF and developed any one of the illnesses described above, you should contact a firefighting foam lawsuit attorney. You may be able to file your own claim and might be entitled to substantial financial compensation. The best thing to do is to see an AFF lawsuit attorney as soon as possible. Your ability to file a  Firefighting Foam lawsuit is subject to the statute of limitations that would start running as soon as you were diagnosed with your illness.

The  Firefighting Foam attorney would review your medical documentation and discuss the facts of your case with you. The personal injury lawyer  who is also a product liability attorney would work with medical experts and physicians to help prove your firefighting foam lawsuit.