Two years ago, most Americans had never heard of a substance called NDMA. Now, tens of millions of people who have taken certain drugs know all about this harmful substance and the dangers it poses because they have learned that it contaminated their medicine. The result is that scores of people have an increased risk of cancer. Plaintiffs have begun to file lawsuits in these cases, and experts are expecting thousands of additional court cases in the coming years as more patients realize that they have been sickened. 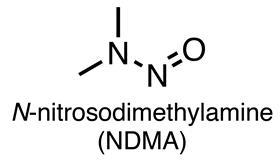 NDMA is a chemical compound. Its scientific name is N-Nitrosodimethylamine. That may not mean much to many people, but this compound is related to rocket fuel and has even been used as a poison. It occurs naturally in many places and can even be found in smoked meats. The compound has even found its way into the drinking water supply in many areas.

NDMA is a volatile compound and is a known carcinogen. While there is a “safe” level of consumption that does not endanger people, once humans exceed a certain level, they can be risking long-term harm. NDMA is odorless and tasteless, so patients could have been ingesting it for years without knowing it. The problem is that the levels of this substance can build in the body.

What Types of Cancer Are Associated with NDMA?

Over time, NDMA has been associated with the following types of cancer:

Anywhere in the path that NDMA takes through your body is at risk of developing a cancerous tumor after years of exposure to NDMA. Patients would need to ingest much more than the recommended intake limit for an extended period of time, but many of the drugs at issue are medications that people take over the long term.

The current fear is that NDMA has made its way into numerous medications. This has prompted a complete recall of numerous classes of medicines and a number of lawsuits. Now, regulators and researchers are actively testing practically all kinds of medicine to ensure that they are not contaminated.

Of course, one would think that drugmakers would never consciously manufacture a product that contains a contaminant. The problem is that they either failed to anticipate how their product reacts under certain circumstances. They might also not have complete control over the manufacturing process, and contamination can be introduced at that point. There are several ways that researchers have speculated about how NDMA is introduced into drugs:

Drugmakers are still learning how NDMA is making its way into drugs. In the meantime, patients who take these medications are at risk. The pharmaceutical industry is still beginning to learn about the extent of NDMA contamination and how drugs are affected. Until the industry knows all the dangers and can fix its own manufacturing processes, consumers may be taking dangerous medications.

Which Drugs Have Been Affected?

Here are some examples of NDMA contamination in certain drugs.

Zantac was once one of the most popular drugs in the country. Used to treat heartburn, Zantac has been taken by tens of millions of people. The active ingredient in Zantac is a compound called ranitidine. There is an entire class of drugs that is based on this compound.

Initial studies were done on Zantac in the summer of 2019 that found that the drug contained unsafe levels of NDMA. At first, the FDA did not urge any recall of Zantac or similar drugs. The initial reports were that the level of NDMA was far below the danger point for cancer. However, other independent tests came back that painted a different picture. These studies showed that Zantac had dangerous levels of contaminants.

Even though the FDA was slow to act, it was the makers of the drugs themselves and the pharmacies that sold them that took firmer actions. The drugmakers began to institute voluntary recalls of their products and pharmacies pulled them from the shelves. Eventually, this recall reached every drug that used ranitidine. The theory is that ranitidine is an inherently unstable compound. When stored, NDMA naturally forms in the compound, especially when the drug is kept at high temperatures. Essentially, the drug makes its own contaminant. This is a sign of an inherently dangerous product design.

By April 2020, the FDA urged that all ranitidine-based products be recalled. Of course, the FDA was late to the game since drugmakers had already largely done this. Now, this class of heartburn drug is completely gone from the market.

Zantac lawsuits are starting to be filed in large numbers. While the drug only elevates the risk of cancer by a few cases per 100,000 patients, the huge number of patients who have taken Zantac means that there could still be thousands of lawsuits filed eventually. As of this writing, there are several hundred Zantac lawsuits that are still in their early phases, with there being a growing likelihood of multidistrict litigation as the number of cases increases.

One of the first drugs to have been found to contain NDMA is the blood pressure medication Valsartan. Here, the way that the drug was contaminated was completely different. As opposed to having a potential design defect like Zantac, Valsartan is alleged to have had a manufacturing defect. The drug was made overseas in China and India, and the lawsuits have alleged that something went wrong in the manufacturing process where NDMA was introduced into the drug. This allegedly affected drugs in this class that were made between 2012 to 2018.

Many different types of Valsartan have been taken off the market in a large-scale recall. While there are still some drugs containing Valsartan that are being sold, the size of the FDA recall grows by the day. Here are some of the makers of Valsartan that have had their products recalled from the market:

There are literally dozens of types of Valsartan drugs that were on the market, so it is vital to check the FDA recall list if you have any safety concerns.

The NDMA Issue Is Just Beginning for Drug makers

These are just two of the drugs that have had NDMA safety concerns. Because of the publicity surrounding Zantac and Valsartan, the FDA and other researchers have been actively testing other drugs to see if they are safe. Often, they are finding that medications that patients have been taking for years pose a risk of cancer.

Now, the recalls are also affecting the popular diabetes drug Metformin, which is now experiencing significant recalls. It is likely that more popular drugs will face widespread recalls as scientists come to learn more. The FDA has been slow to react to this danger. In the future, the regulator may take a more proactive approach to help patients which could result in even more recalls. Even if experts say that NDMA “is probably carcinogenic” and poses a “small increase in the risk of cancer.” when millions of people are taking these medications, we could be dealing with potentially tens of thousands of people who were sickened by these drugs.

If you have taken any drug on a long-term basis, it is crucial to monitor news for a possible recall of the drug. Patients who have taken any drug over a period of time and have developed a type of cancer associated with NDMA should see a drug recall lawyer in order to learn more about their legal options. They may be able to file a lawsuit against the manufacturer for financial compensation. Since you usually have two years from the time that you were sickened to file a lawsuit, it is vital to see a lawyer today.