For many years, Zantac was one of the most popular medications in America. The heartburn medication set numerous sales records and was one of the first things that people associated with heartburn relief. Now, you will not find Zantac on store shelves. The drug has been pulled from the market as studies have shown that it contains a substance that is a known carcinogen. While the extent of the problem is not yet known, the maker of the drug now may possibly face staggering legal liability due to the sheer number of people who have taken Zantac over the years. The first lawsuits in the product liability case have been filed. By the time that the litigation concludes years from now, this could grow to one of the larger mass tort actions in U.S. history.

Update- 7/5/2020- “The United States Judicial Panel on Multidistrict Litigation (JPML) consolidated these cases in February 2020. Together, the cases form MDL 2924. Judge Robin L. Rosenberg scheduled the initial MDL conference for March 20, 2020. The court recently made adjustments to its schedule due to COVID-19. First, the court canceled the initial conference. Second, the court expressed interest in rescheduling the conference when all participants could attend. But social distancing measures may prevent that.” Consumer Safety 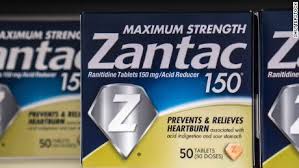 Zantac is a drug that is intended to treat heartburn, stomach ulcers and gastroesophageal reflux disease. Zantac is one of the commercial names for the drug ranitidine. In actuality, Zantac is one of many different drugs in this class, but it is the most well-known medication and has become associated with the type of heartburn drug much in the same way that people associated Coke with cola.

Ranitidine acts as an inhibitor. Gastric parietal cells have histamine receptors that are involved in the production of stomach acid. By inhibiting them, the amount of stomach acid is decreased, lessening the heartburn and ulcers that it causes. Ranitidine was originally developed by GlaxoSmithKline. Now, the drug is sold in the U.S. by Sanofi. The drug has always posted among the highest sales numbers of all medications. By 1990, the drug was doing over $2 billion in sales. It soon faced competition from drugs such as Prilosec and Nexium, but still maintained its place near the top of the market.

What Is the Problem with Zantac?

In order to understand the problem with Zantac, it is necessary to take a step back earlier to 2018, when contamination problems with other drugs began to be detected. During that time, testing revealed that the popular class of blood pressure medications called valsartan contained a possibly harmful substance that was introduced during the manufacturing process.

The specific contaminant is something that is called NDMA. It is a substance that can be found in certain processed foods and even groundwater. Its scientific name is dimethylnitrosamine and it is an organic compound. The problem with NDMA is that it is a known carcinogen in laboratory animals. This does not mean that all human beings who ingest any amount of NDMA will develop cancer. However, the government determines the safe amount of NDMA that a human can consume without being at risk for cancer.

Zantac was tested and was found to contain NDMA

In Valsartan’s case, the NDMA content was high enough that taking the highest dose of the medication for four years straight would have resulted in one additional case of cancer for every 8,000 patients. This led to the drug being pulled from the market. After the issues with valsartan, additional tests were conducted of other drugs now that NDMA was a concern. Zantac was tested and was found to contain NDMA. At first, there was little concern because the amount of NDMA in the drug was not considered to be dangerous. However, this began to change as more became known.

Manufacturers began to pull their products from the market

The FDA released its initial communication about Zantac in September 2019. At first, the FDA said that the amount of NDMA in Zantac was only a little more than was contained in common foods. At the time, the FDA only said that it was evaluating the levels of NDMA and did not recommend any further action, including any product recalls. However, the companies who sell ranitidine based medicines soon began to do the work on their own to remove these products from the marketplace. Manufacturers began to pull their products from the market one by one. This included Zantac, which became one of many medications to become the subject of a voluntary recall. Not only did the drug makers remove their products from the market, but large pharmacy chains also removed these drugs from the shelves.

The FDA continued to test the different ranitidine products. The regulator still believed that the levels of NDMA in these drugs were not any more than one would ingest by eating smoked meat. However, the testing results for some of these drugs revealed NDMA levels up to seven times the recommended daily limit. By April 2020, the situation began to become more readily apparent to the FDA. At the time, the regulator issued a statement on April 1 that requested the removal of all over-the-counter ranitidine drugs from the market. The FDA requested that the manufacturers who had not already taken ranitidine products off the market do so now and that stores stop selling them. By this time, the FDA had concluded that the levels of NDMA in Zantac were unsafe and that consumers should no longer take the medicine.

Researchers are still determining how Zantac became contaminated with potentially unsafe levels of NDMA. The initial theory leads to a different conclusion than other types of pharmaceutical NDMA contamination. In the case of valsartan, the contaminant most likely was introduced as an impurity during the manufacturing process. However, the initial theory about ranitidine centers on the properties of the substance itself. One theory is that ranitidine itself is an unstable substance that can itself develop into NDMA over time. In other words, ranitidine itself makes the NDMA.

NDMA developed when it was stored

One lab tested Zantac and found that NDMA developed when it was stored. The problem became even worse when Zantac was exposed to high heat.  This would generally happen when the product was being shipped or when it was in storage.  In other words, when the product leaves the factory, it does not contain unsafe levels of NDMA. Instead, this happens through a reaction over time. The older a box of Zantac is, the higher the levels of NDMA will be contained in the product.  This is a theory that the FDA accepted in its April 1 recall letter.

Given the millions of people who have taken Zantac over the past four decades, it is likely that there will be thousands of lawsuits relating to the contamination of NDMA. Even if the incidents of cancer occur at the same rate as they are estimated due to valsartan exposure, this would still amount to several thousand people developing cancer due to taking Zantac.

The first lawsuits against Sanofi are moving forward in Florida. The plaintiffs have filed suit against both Sanofi as well as Boehringer who owned the U.S. rights to the drug before Sanofi. Of course, since these lawsuits have only recently been filed, they will take years to move through the legal system, and it will take some time to know whether the makers of the drug will be held liable.

In February 2020, 15 lawsuits were transferred to federal court in South Florida. This is the beginning of what may become large multi-district litigation and can form the basis for the coming litigation relating to Zantac. Now that the case has been given multi-district status, there is the possibility that many additional cases will be joined to the lawsuit. Multi-district status facilitates large-scale litigation by making all discovery in the case common. In actuality, there are two different types of lawsuits against the makers of the drug. In addition to the individual lawsuits by plaintiffs who claim that they got cancer after taking Zantac, there is also a class-action lawsuit on behalf of consumers who argue that they would have never bought the drug had the warning label alerted the public to the NDMA content.

Carcinogen was connected to ranitidine

The lawsuits claim in part that the makers of Zantac knew all along that the product had the capability to become contaminated with NDMA.  According to the plaintiffs, there were numerous scientific studies in the years before the FDA first alerted the public about NDMA that showed that the carcinogen was connected to ranitidine.  However, the defendants did not add any warnings about the presence of NDMA to the product’s warning label. The lawsuits accuse the companies of concealing the information from the public.

In addition, the lawsuits also argue that the design of Zantac was defective. A product that was safely designed would not become contaminated during storage. According to the plaintiffs, the use of a substance that is so inherently unstable that it degenerates into a carcinogen is an inherently dangerous design, and the companies could have developed a stomach medication that relied on another compound.

Types of Cancer Connected to NDMA

NDMA has the potential to cause cancerous tumors on the digestive system. In addition, there is also the risk of liver or kidney cancer. One of the first lawsuits that were filed was brought by a plaintiff who claims that Zantac caused prostate cancer, In addition, the product has also been connected to possible esophageal and throat cancer.

Hurdles that plaintiffs may face

Since news of the FDA’s findings only broke in September 2019, there is still much to be learned about the types of cancers that can specifically be tied to Zantac. We will likely learn more once additional lawsuits are filed in the case. One of the hurdles that plaintiffs may face in this case is showing that their cancer was specifically caused by Zantac. Demonstrating causation is a requirement in a personal injury lawsuit, and the plaintiffs will have to bring scientific evidence that shows that this critical element of the lawsuit has been met.

If you have taken Zantac on a daily basis and have been diagnosed with cancer, you should consult with a personal injury attorney to learn of your legal rights. You may be entitled to substantial financial compensation for the harm that you have suffered. Your consultation with the Zantac lawsuit attorney is free and you owe the Zantac class action attorney nothing unless they are able to help you recover financially for your injury.