Uloric is intended to treat acid levels in people with gout. While this is in incredibly painful condition, the treatment may be even worse than the ailment. The FDA has ordered a boxed warning for Uloric, alerting patients to a risk of death when taking the drug. Takeda Pharmaceuticals, the maker of the drug, is now the defendant in numerous lawsuits alleging wrongful death and other damages. As of now, injured patients and their families are still filing lawsuits, and they have yet to go to trial. Uloric was first approved by the Food and Drug Administration back in 2009 for the treatment of gout. Uloric is another name for Febuxostat. The usual medication that people take for gout is called allopurinol. However, not everyone can tolerate the drug. Those who cannot take allopurinol take Febuxostat. In addition, studies have shown that Febuxostat is more effective than allopurinol for treatment of gout. Victims are currently filing uloric lawsuits to get justice and compensation from Takada. 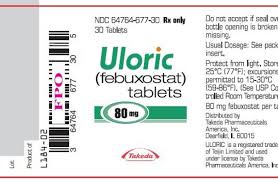 Gout occurs when urate crystals accumulate in the joint. It is a form of arthritis, and it causes inflammation. It can be very debilitating and can cause extreme discomfort. Gout happens when someone has a high uric acid level. While weight is a contributing factor, many people can suffer from gout. Men more commonly suffer from gout than women. Now, gout affects an estimated eight million Americans, which is roughly 4% of the population. Gout is characterized by:

Gout most often affects the big toe, but it could also impact the foot. In severe cases, the patient may need surgery on the foot. Patients will experience flare ups when their foot or two will become filled with crystals. This can last for weeks and may affect their ability to walk.

Update-7-20-2020– “A Texas man recently filed a new Uloric lawsuit in the U.S. District Court for the Northern District of Illinois. He claims that after taking the gout medication, he suffered from serious injuries. He seeks to hold manufacturer Takeda Pharmaceuticals liable for damages.” New York Legal Examiner

2/1/2019- “In February 2019, the FDA required a boxed warning be placed on the Uloric (febuxostat) label—the highest level of warning a drug can carry. It alerts healthcare providers and patients to the possible increased risk of death from all causes with Uloric compared to allopurinol (Zyloprim), another prescription gout medication.” Id.

How Uloric Works on Gout

Uloric treats gout by lowering your uric acid levels. While most of the uric acid that your body produces is natural, you may have about one-third of it that comes from things such as diet. Purines in your food and drink will produce uric acid. Purines are chemical compounds in food that become uric acid. Usually, the kidneys will filter these out of your body. However, they can linger and raise your uric acid levels. Uloric will act as a blocker, keeping the purines from producing uric acid.

Before the negative news reports came out, Uloric had captured some of the market for gout medications in the U.S. In 2018, Uloric did over half a billion dollars in annual sales. Now, doctors are thinking twice about prescribing the drug in light of the danger. FDA guidance is that they cannot prescribe this drug any longer, unless the patient is not able to tolerate allopurinol

The common side effect of Uloric is liver function abnormalities. In addition, some patients will actually experience an increase in gout flare ups when they first start taking the medication. Other side effects can include nausea, joint pain and dizziness.

It is another extreme side effect that has led to the Uloric lawsuit. In fact, this is the worst side effect of all; death. This is where we need to go into detail about Uloric’s checkered history. The FDA did not approve this drug on the first or second attempts at approval. The reason was that there were known cardiovascular issues associated with taking Uloric. The FDA twice rejected Uloric before it finally approved the drug in 2009. The FDA only approved the drug on the third try because a safety study did not raise the same serious red flags. However, when the FDA finally approved the drug, it required Uloric to perform a postmarket study. This is where the serious dangers associated with the drug became apparent.

The results of the study were released in 2018, and they were disturbing to say the least. The study compared patients taking Uloric with those taking allopurinol. Over 6,000 patients were included in the study. The overall death rate among patients taking Uloric was higher. The risk of a cardiovascular event was over 33% higher than it was for allopurinol. In other words, Uloric increases your risk of a fatal heart attack.

After that, the results went to the FDA for review. The agency decided to order a box warning. This is the highest level of warning that it can mandate for a medication. For many medications, it is the kiss of death because it can scare off patients. Here, the FDA said that Uloric would not be a first-choice medication for gout but would only be prescribed if the patient could not take allopurinol for whatever reason. The FDA required doctors to counsel patients about the risk of cardiovascular events associated with this drug. Obviously, the FDA action greatly cut into annual sales.

Numerous patients or their families are now coming forward with their stories of how Uloric caused their heart attack or even killed their loved ones. Patients are filing new lawsuits, and the number of court cases is growing. Here are some recent stories of people who claim that their lives were devastated by Ulroic, whether it was through suffering a heart attack or the loss of a loved one:

The lawsuits accuse Takeda Pharmaceuticals of serious misconduct. One of the grounds that appears in Uloric lawsuits is that Takeda allegedly engaged in a scheme to hide the true extent of the testing from the public. The lawsuits claim that Takeda suppressed a substantial number of adverse event reports and hid them from the FDA when the drug gained approval. In addition, Takeda stands accused of submitting falsified data to the FDA in order to gain approval. This is the type of behavior that, if true, could allow plaintiffs to even receive punitive damages in their lawsuits.

The plaintiffs also argue that Takeda knew of serious safety issues with the drug and failed to disclose them to patients. Instead, Takeda marketed the drug as safe and gave off the impression that there were no problems with Uloric, knowing full well of the potential risks to plaintiffs. The lawsuits claim that Uloric is defectively designed and manufactured as is unreasonably dangerous to patients.

As of now, each of these lawsuits is proceeding individually in federal court. We believe that there is a possibility that they could be consolidated into multidistrict litigation at some point in the near future. Most of these cases are already in the Northern District of Illinois. They are still currently in their early phases, and no trial dates have been set.

If you have been injured or have lost a loved one who was taking Uloric from a heart attack, you may be entitled to substantial financial compensation. You should consult a Uloric lawsuit attorney to learn about how you can file a lawsuit against Takeda Pharmaceuticals to receive the compensation that you may legally deserve. However, you must act quickly before the statute of limitations expires. We work for you on a contingency basis, so you pay nothing for our services unless you obtain some sort of financial recovery. Your initial consultation is free and comes at no risk to you.