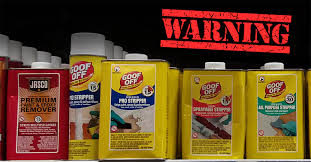 What is Methylene Chloride?

Methylene chloride is a colorless liquid that is used in various industrial processes. It can be used in paint thinning and stripping, metal cleaning and degreasing and pharmaceutical manufacturing. It can also decaffeinate coffee and prepare other extracts and be used for a variety of other specialty processes. Its main use is as a solvent since it can dissolve organic compounds. There are several different manufacturers of paint thinners that contain methylene chloride. The largest such manufacturer is W.M. Barr. and Jasco also makes paint thinners in this product line. Paint thinners with methylene cholirde are banned for sale on Europe.

The Dangers of Methylene Chloride

While methylene chloride is not toxic on its own, it still is a highly dangerous substance. Since it is chemically volatile, it poses a high risk for inhalation. When one inhales methylene chloride, a variety of grave complications can occur. At a minimum, complications include dizziness, fatigue and nausea. More alarming are the severe consequences that can occur. According to the Occupational Health and Safety Administration,this product is thought of as a carcinogenic.

There have been numerous instances in which workers suffered death as a result of exposure to methylene chloride. Reports of these deaths go back decades. When people die from exposure to this product, it is because they inhale the toxic fumes. This type of death occurs quickly and there is little that can be done to reverse the effects. People are simply overcome by the toxic chemicals emanating from the paint thinner and die quickly. In other instances, the toxic chemicals can cause people to suffer heart attacks.

The reports of complications and deaths from this product have been so prevalent that the Environmental Protection Agency had proposed a rule banning paint thinners with the use of methylene chloride. This rule was proposed on the day before President Barack Obama left office as part of the final flurry of regulatory activity before the end of his term. However, the Trump Administration has not yet finalized the rules, meaning that these products can still be sold. There have been several variants of the rules that have been proposed that will still permit some limited uses of these products as opposed to instituting an outright ban. Even though the EPA has delayed finalizing these rules, several major U.S. store chains have stopped selling these products. Lowe’s and Home Depot have pulled these paint thinners from their shelves as they now face liability for selling these products. Nevertheless, it is still possible to purchase these paint thinners.

There have been a variety of different lawsuits that have been filed in regards to deaths and complications resulting from these paint thinners. Recently, two mothers whose children died after using paint thinner have filed a lawsuit against the EPA. The lawsuit claims that the EPA delayed in banning the product even though there is clear evidence that it can be fatal. While the EPA cannot be sued for monetary damages, the lawsuit seeks to compel the EPA to issue the final rule completely banning paint thinners with methylene chloride that is has delayed in finalizing for two years.

In addition, there are suits against the retailers that sold these products to consumers. When it comes to product liability lawsuits, anyone who has touched the product in the stream of commerce is a potential defendant that can be liable to the consumer. While most lawsuits focus on the manufacturer of the product, the seller can also be equally liable. Here, Home Depot did not phase out selling this product until 2018 despite years of reports that they were incredibly dangerous. The retailer is the subject of a class action suit that was filed in January 2019. The named plaintiff purchased the product in the store in October 2018, which was months after Home Deport announced that it was phasing out the product and nearly a year after its competitors said that they would stop selling the product. The plaintiff developed a lung infection after using the product which required hospitalization.

There have been many lawsuits that have been filed against W.M. Barr alleging the defective nature of the product. In many instances, the manufacturer has settled the lawsuits without admitting any sort of guilt. However, W.M. Barr typically attempts to deny liability for the harms suffered by plaintiffs by arguing that the warning label for the products clearly spells out the potential side effects of usage. In some instances, courts have sided with W.M. Barr when it comes to the issue of whether potential users were adequately warned. Nevertheless, there are open legal questions of whether these products are defectively designed and whether the manufacturer was negligent in the design of the product.

“Home Depot is on the receiving end of a proposed class action lawsuit centered on W.M. Barr & Company-made paint stripper products sold under the “Klean Strip” brand name, particularly the “Klean Strip Premium Stripper.” The lawsuit of out Florida’s Middle District alleges the products contain highly toxic methylene chloride, a chemical banned from use in paint strippers and linked to “dozens of deaths around the country,” and that Home Depot moved far too slowly in removing the products from store shelves. Products containing methylene chloride are already banned in Europe,” the suit reads. “In sum, methylene chloride’s toxicity is deathly and has no place in a consumer product.” Class action.org

“The complaint points out that Home Depot competitors Lowe’s, Walmart, and Sherwin-Williams stopped selling methylene chloride-containing paint strippers in early 2018. In June of that year, the lawsuit continues, Home Depot issued a statement in which it said it planned to phase out paint removal products that contain methylene chloride and N-methylpyrrolidone (NMP) “by the end of 2018.” As the case tells it, however, Home Depot was too late to the party in removing toxic paint stripper products from its stores. Worse, according to the lawsuit, was Home Depot’s approach to phasing out the products, which the case decries as “an obvious measure to ensure that revenue would not be lost from existing merchandise.” Class action.org

If you or a family member has been injured after using a paint thinner containing methylene chloride, there are a number of different options for obtaining a legal remedy. Even if the manufacturer is not held liable, the store that sold you the product may be responsible for the harm that you have suffered. You should seek out paint suit home depot legal counsel and discuss the facts of your case with a toxic paint stripper lawsuit law firm. A methylene chloride home depot lawsuit attorney can inform you whether you have a viable claim and what the process is for obtaining legal relief.