This Onglyza lawsuit article was authored to provide information to victims. Onglyza and Kombiglyze are DPP-4 inhibitors that have been used in the treatment of type-2 diabetes. They are intended to reduce glucose levels in the blood by inhibiting GLP-1 and GIP incretins at mealtime, right after they are created. However, like other type-2 diabetes medications on the market, these two medications have been tied to an increased risk of heart failure. This has caused the FDA to issue a warning about the possibility of heart failure that could be caused by these medications which must be included on the product label. There have been numerous lawsuits filed against AstraZeneca, who is the manufacturer of these drugs. If you or a loved one has taken these medications and has sustained damage to your heart, you should immediately contact an onglyza lawsuit attorney. An  onglyza lawsuit law firm can help you get justice as a result of the allegedly defective medication.”

Update In February 2018, a federal panel consolidated cases against Bristol-Myers Squibb and AstraZeneca in federal court in Kentucky.” Drug Watch 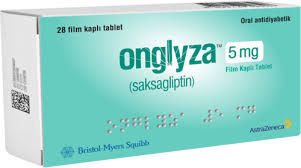 What are Onglyza and Kombiglyze?

These two drugs fall into the category of DPP-4 inhibitors. Diabetes medications can be broken down into several different classes. Some of these medications are inhibitors while others are receptor agonists. They act to reduce blood sugars in different ways. DPP-4 are enzymes that act to destroy incretins that the body needs in order to produce enough of the insulin that it needs. When more incretins are released, the blood glucose level is lowered and gastric emptying is decreased.  Onglyza is intended to send signals to the pancreas to decrease glucagon secretion. Glucagons cause the liver to convert glycogen into glucose. This is what causes blood sugar to be elevated. When Onglyza signals the pancreas to produce more insulin, it results in a higher absorption of the glucose and keeps it out of the bloodstream.

Combination of Onglyza and metformin

Kombiglyze acts in a similar manner to Onglyza. It consists of saxagliptin and metformin hydrochloride. In other words, it is a combination of Onglyza and metformin that is intended to help patients achieve the maximum possible benefit from taking just one pill. It is also a DPP-4 inhibitor and acts to stimulate insulin production.  The products were approved by the FDA in July 2009. Around the time of approval, the FDA required the manufacturer to perform additional testing regarding the risk for cardiovascular events that are associated with the drug. These two drugs are in the same class as Januvia and Janumet.

Side Effects of Onglyza and Kombiglyze

The two drugs have become associated with several different harmful side effects. Beyond the more minor side effects, these medicines can also cause pancreatitis. Significantly, it became apparent that there is a connection between these two drugs and heart failure. Specifically, there was a study released in the New England Journal of Medicine in 2013 that examined the linkage between these DPP-4 inhibitors and cardiovascular events. The study found that the risk of being hospitalized with a cardiovascular event increased by roughly 27 percent for patients taking Onglyza. The risks are particularly more acute if the patient has a previous history or risk of heart disease.

In the immediate wake of the study, the FDA stated its intent to more closely review the study and its results. After reviewing the raw test data, the FDA issued a Drug Safety Communication in April 2016 alerting patients to the linkage between these two medications and heart failure. The FDA added warnings to the labels for these drugs that informed patients of the possibility that they could experience heart failure as a result of taking these drugs. The FDA did not order the discontinuance of use of Onglyza or Kombiglyze.  If you have suffered side effects and complications from Onglyza, you should consider pursuing an onglyza lawsuit.

Lawsuits Relating to Onglyza and Kombiglyze

There are currently over 200 lawsuits that are pending against AstraZeneca and its former partner Bristol Myers Squibb in connection with heart failures allegedly experienced as a result of taking these medications. These lawsuits were first filed in 2017 and have been slowly gaining steam as over 100 new lawsuits were filed in the first six months of 2018. There are numerous lawsuits pending alleging different complications from all of the DPP-4 inhibitors that are on the market.

Manufacturers should have known of a possible connection

However, during the time between the drug was approved and when the study results were released, the manufacturers should have known of a possible connection between the medications and heart failure, especially given the FDA’s specific direction for them to undertake further study. The plaintiffs allege that the manufacturers suppressed material facts that otherwise indicated that these products were dangerous. According to the plaintiffs, the drugmakers had a duty to warn patients of the dangers of these products and failed to do so. The Kombiglyze lawsuits allege that these medications were defectively designed and inherently dangerous. The lawsuits further allege that the heart failures experienced by patients were as a result of the manufacturers negligence in designing and producing these two medications.

Currently, all of these lawsuits are pending as a multi-district litigation that has been moved to federal court in Kentucky. This means that the cases are proceeding as one for purposes of pre-trial discovery. However, they are not being treated as a class action suit due to differences in each patient’s own circumstances. All of these cases are in their early phases and trial will still not be for some time.

If you have taken these medications and believe that you have experienced side effects, an onglyza lawsuit attorney can advise you of your legal rights. When you talk to a lawyer, you can learn about your prospects for achieving a legal recovery for any harms that you may have suffered although a Kombiglyze lawsuit lawyer cannot make any guarantee that you will be compensated.