The da Vinci Surgical System is intended to help physicians perform invasive surgical techniques without having to make large incisions in the patient’s body. The system itself is an invasive one, entering into the patient’s body. Contrary to its name, it is not a self-guided surgical system that does the work while the surgeon stands by watching. Instead, it is guided by the surgeon. The da Vinci Surgical System has not been without its share of complications as it has often left a trail of harm in the patient that it was meant to help. As a result, the product maker is facing numerous product liability lawsuits, some of which it has already settled. 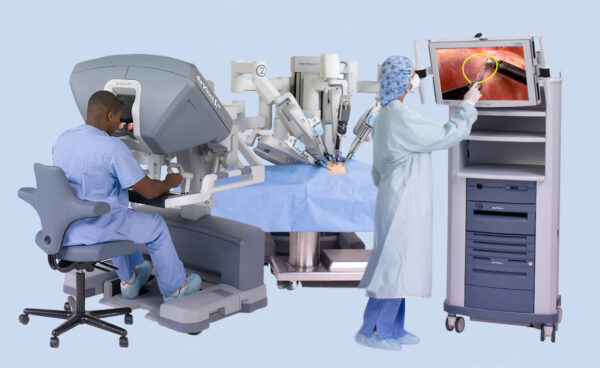 Intuitive Makes Billions of Dollars Off This Product

Intuitive Surgical Systems is the maker of the product. The da Vinci system was approved for use by the FDA in 2000, and it has gained some acceptance on the market. There are over 5,000 robots in use worldwide and roughly 4,700 in the United States. While this does not seem like a large number, you should consider the cost of each of these systems. These robotic surgery systems cost up to $2 million each. As such, they are large money makers for the company, which booked almost $4 billion in revenue in 2018. Its robotic surgery systems are so valuable that the company’s market capitalization is nearing $100 billion.

The da Vinci Surgical System is essentially a very smart scalpel that assists the physician in performing delicate surgeries that would otherwise need large incisions. The system gets its name “robotic” from the fact that the physician is not physically using the scalpel with their own hands. Instead, they guide the scalpel using robotic technology. Instead of cutting into the patient on their own, they are largely behind the controls of the robot.

Where the da Vinci Surgical System is novel is that its movements translate the surgeon’s hand movements in real-time. The robot allows for a greater range of motion than if it was just the surgeon using a manual scalpel. In addition, the robot sends back 3D pictures for the surgeon at the console, enabling to get an even closer look at the affected area.

Hospitals want to have the latest technology and need to show patients that they are on the cutting edge of medical advances. Many of them have rushed to buy this system because the medical industry is a competitive one, and each hospital wants to keep up with the next. They are all trying to get the most patients, so they can have the highest revenues and the biggest amount of leverage with the health insurance companies. In turn, they could charge much more for robotic surgery procedures, and the health insurance companies pay the bills.

Intuitive Has a Checkered History with the FDA

However, as advanced and revolutionary as the da Vinci system seems, it has not been without its share of serious problems. While the product maker and the federal government told patients that this was entirely safe, the reality was quite different. Intuitive was already warned by the FDA in 2014 because it did not properly file medical device reports for product malfunctions. The company was also told by the FDA that it needed to cut down on equipment failure or face fines and punishment.

The real problems for patients and their families are the complications of robotic surgery procedures. This “smart” system has been shown to cause damage to patients. One of the biggest risks of the Da Vinci system is that it can cause damage to the patient’s internal organs. They have experienced perforations and punctures in the organs. One particular risk is to the uterus since the da Vinci system is often used during hysterectomies.

The surgical robot has, on occasion, caused abrasions and cuts inside the body. Patients have died from these procedures, especially when the cuts happen in vital organs like the kidneys. Other surgeries have perforated or cut patient’s bowels.

Another problem is the electrical current that the robotic system emits in the body. This can cause serious internal burns and permanent damage to organs. In some cases, patients have been electrocuted during surgery. In addition, some patients have developed pneumonia after surgery as a result of the robotic procedure or developed sepsis after a severe infection.

Patients injured by the da Vinci Robotic System have experienced:

The problem is much worse than what has been reported in the FDA’s database of adverse events. The FDA has had adverse events that remained hidden from the public so the public was never fully aware of the dangers of certain medical devices and drugs. The real numbers of injuries are much higher than the public initially saw.

Patients and their families have sued Intuitive seeking damages for the harm that was done to them by this technology. Some of these lawsuits have been successful. For Intuitive, this seems to be a drop a drop in the bucket as the company nears a market cap of $100 billion. Nonetheless, families have a legal right for compensation when their loved ones have been seriously injured. While Intuitive claims that this surgical system benefits patients, the product is a gravy train for everyone involved, and patients face a greater risk of injury.

Grounds for a Da Vinci Lawsuit

Some da Vinci lawsuit settlements and verdicts have been for high dollar amounts. For example, in 2016, da Vinci settled a product liability lawsuit against it for $30 million right before the jury issued a verdict. Intuitive seems to settle many of the cases against it before they head to trial. The company appears to be risk-averse. While we cannot guarantee that they will settle your case, Intuitive does not often fight these lawsuits. In fact, in their 2018 financial filings, the company indicated that they have put over $17 million away to settle existing and future claims against it.

At any given time, there are roughly 100 lawsuits against Intuitive open, but the number of cases may grow in the future. Previously, the company paid $67 million to settle over 3,000 lawsuits filed against it. While the same problems with the system continuously arise, Intuitive keeps selling the robotic surgery system because they simply make too much money to stop.

Since courts have not granted motions for multidistrict litigation, you could file your lawsuit anywhere that has jurisdiction over your case, so long as you bring your case before the statute of limitations expires. This is why you need to see a da Vinci robotic surgery lawyer today. The first step towards filing a lawsuit against Intuitive for injuries suffered in a da Vinci robotic surgery procedure. Contact us today to schedule your free no-risk initial consultation.